We had looked at the charts and decided to leave Arendal via a different passage to the one we used to enter the harbour. After all we were getting used to picking our way through the rocks now! The mainsail was hoisted and was drawing nicely but because of our inability to manoeuvre within the passage the headsail was left furled until we reached the open sea.

Another beautiful setting with houses sited to maximise the water views and often incorporating a boat shed as an integral part off the house with internal access!  Along the way we passed the locals in small boats catching their evening meal which reminded me about a funny plaque I had seen in Inverness:

Eventually we reached the open sea and the wind piped up right on cue. With a full main and full headsail we were off to Gothenburg. By now Mike Watson the new crew member who joined us in Aberdeen had found his sea legs and was no longer feeding the fish. What a difference it makes when you become comfortable with the movement of the sea. I am also aware of how people feel when they go deep sea for the first time and have no reference points whatsoever – no land, no lights, no ships and just your little ship in the ‘middle of the briny’! Sometimes a feeling of fear takes over and causes sea sickness in people who have not been prone to it when boating in inshore waters. All these these afflictions pass with a good attitude and time.

I once sailed across the Tasman Sea in the middle of winter with Dick Estaugh, an excellent Skipper with over 60,000 nautical miles under his belt and he said, “the only cure for sea sickness is sitting under a Gumtree and there ain’t no Gumtrees out here”! On that voyage there was he and I, and two younger crew members, my daughter Kirstin (age 21 at the time) and an ex sub mariner from the Royal Australian Navy called Mathew Young (then 27). None of us even looked like being seasick during the almost 3 week passage, in spite of the fact that we encountered 5 metre seas going through Bass Strait. It must have been a happy voyage because Mathew and Kirstin are now married with four children having met on that yacht.

We sailed all through the night with fair winds which eventually petered out in the morning and we had to motor for a while. Getting in to Gothenburg was another navigation mission as we had ships suddenly appearing from behind rocks and then you try to figure out which channel they used. There is of course the IALA buoyage system but with so many small channels, where they meet becomes a puzzle. If all else fails then the default code is to find a ship bigger than you and follow her wake exactly into port!

There is a large suspension bridge across the river which marks the start of the Gota Canal which is a short cut to Stockholm via the largest lake Vanern. It has a 45 metre air draught and so no problems for Roaring Meg under this baby. We passed by a huge gantry crane with Ericburg written on it ands here you came learn later that 30 years ago the shipyard was very busy and now nothing except the Volvo factory. 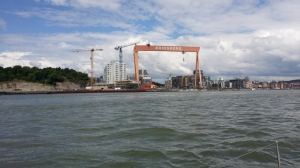 Gothenburg is the second largest city in Sweden. We moored in the Lilli Bommen Marina which is right next to the Opera House. It was ‘bows to’ mooring and the gap we steered into was rather tight but our Kiwi Bilge Rats were all over it, and Meg was once again secure. Always the staff are very courteous and friendly.  When in the European Union nobody seems to care who you are or where you came from. This was in complete contrast to Greece and Turkey where we had to buy a Transit Log for the yacht, produce all of the crew’s passports at each port, along with an updated crew list. Here, so long as you pay your fees everybody is happy. 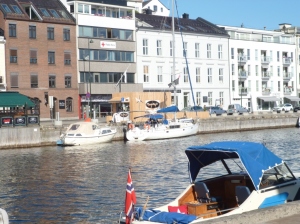 We lunched in a cafe alongside the Marina and all three of us had the open shrimp sandwich as it looked very generous – each plate had 200 grams of pure shrimp meat on it. Yum! Mike had been recommended a couple of bars to check out. One was called the Himmel Bar and was built around the large flight of steps up to the Art Gallery which meant that we could have beer and culture at the same time! It was a nice situation and a beautiful evening – we could see most of the way down the Main Street from this high vantage point. We decided that the architecture in Gothenburg was well, very Gothic really, and it was consistent throughout the city – as a group of buildings they looked excellent together. The second recommendation was ‘Cafe Public’, in Masthugget, a locality with a slightly seedy reputation and a lot of character. The world was watching the FIFA cup matches and we joined them with a pint of the local brew. They may be soccer fans but when when you mention New Zealand everybody knows of the All Blacks.

The next morning we tried to install the Navionics software for the Baltic and alas alack it would not boot up. Panic set in! We now knew just how many rocks are strewn around the Baltic and how much accuracy was required for navigation. I sent an immediate email to the supplier in the U.K. suggesting that the software must be corrupt. Answer – No it is more likely that your chart plotter needs a software update to run it. We googled the nearest local agent and phoned them. They said to pull the chart plotter out of the instrument pod and bring it to them and they would sort it. I jumped on a bus and offered the driver money for the fare. He replied that he could not take money but told me to sit down and enjoy the ‘free introductory offer’! Within 15 minutes I had handed over the unit to the service centre for Raymarine and they were updating my unit. In quarter of an hour I left with a going concern after paying 450 Swedish Kroner (~75 NZD) and I was delighted – too easy. Sometimes solving a simple problem in a foreign country can take 2-3 days because of a lack of local knowledge and the language barrier.

The crew split up. Mike went to a Gym just across the road from the Marina. The fees for casuals were huge but as the young lady pointed out – he could opt for the ‘one week free trial’! Graham went to the maritime museum which claimed to be the largest floating museum in the world. The Captain wrote some more Blog. 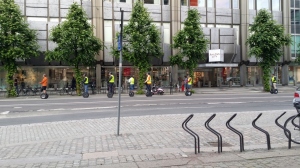 During our Scandanavian visit we took a leaf out of the local’s book and enjoyed Happy Hour before setting out for the evening. All drinks are FREE aboard the good ship Roaring Meg during Happy Hour!

The next day was Thursday 3 July and we woke up to the sound of heavy rain. The small amount of clothes that I had washed by hand and hung out on the safety lines were saturated again – bugger! Mike and I went off on a special mission – to find a sewing/alteration business who would sew up/hem our large black Kiwi flag that was now rather frayed around the edges and looking like it may not see the voyage out. Since Meg has been in Europe we have always flown the large Kiwi battle flag below the country courtesy flag. Eventually after many questions we found the right shop above a pizza joint. Yes, she could do it and would tomorrow afternoon at 5pm be OK? Answer – not really because we will be in Copenhagen but how would NOW suit! This express service would naturally cost extra but we settled on 120 Kroner (twenty bucks heavy) and come back in 10 minutes – YES.

Next job was to provision the yacht. For a big shop we use the 120 litre Katmandu rolling bag which can handle 50 Kgs but today was to be a top up and a hand carry. We found some beautiful salmon steaks in a fish shop and could not resist. They were butterflied and looked perfect.

METHOD: Cut a 50 mm strip out of the side of a pin boned side of salmon with the skin on. Then make a knife cut vertically and parallel to the sides of the strip (25 mm in from each edge) slicing through the flesh ONLY and leaving the skin intact. And then fold it inside out. The perfect fillet with no bone and in the shape of a cross section of salmon.

The rest of of our grocery shopping was the usual mundane stuff but we did it. We prepared to go to sea – fill the water tanks (2 x 200 litres), make sure the house bank batteries are fully charged from shore power, provision the yacht and lastly fuel up. All sea cocks and hatches closed including toilet facilities as sometimes the sea will back flow through the toilet and create a big mess. Graham checks the engine oil and water levels and warms the motor up. I turn on all instruments and check they are all working and we are ready to ‘let go the lines’. Depending on wind strength, direction and whether we are moored  ‘bows to’ or ‘stern to’ or ‘port side to’ or ‘starboard side to’ we decide on the strategy for leaving the berth. Often when pinned to the wharf by wind we will spring off using either the stern line or bow line as a snub however you require extra fenders to protect the squeeze zone. The ‘prop walk’ will then take you off the wharf.

We eased our way out of the berth and pointed Meg towards the open sea with Willie Nelson singing “On the road again”! There was supposed to be a fuel dock between the huge gantry crane and the suspension bridge but a new development  was underway and there was no fuel to be had. As we were expecting fair winds we decided to simply transfer 1 x 20 litre container (giving us 70 litres in total) to the main tank and sort out fuel at the next port of call.

Gothenburg had been another excellent stay and now we looked for a new channel that would take us out in a southerly direction toward Copenhagen.