We left Lilli Bommen Marina around 1500hrs but it took another 1.5 hours before we were completely clear of the harbour approaches and the rocky shoreline. Open water is generally safer than closing the coast. With regards to Safety at Sea it was once explained to me like this; 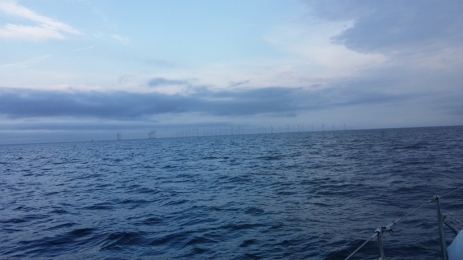 We had an excellent sail to Copenhagen so much so that we wondered when our luck was going to change. A moderate sea and 15 -20 knots of breeze – champagne sailing! We arrived off Copenhagen about 1400 hrs after a 125 Nm voyage. The first impression was, “Geez how many wind generators have those guys got”! 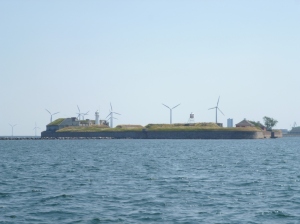 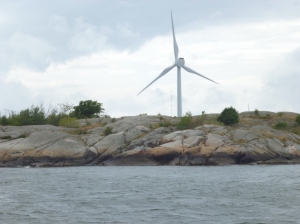 The ‘Mittelgrund’ outside of the harbour entrance has a long line of generators sticking right out of the sea. There are many more to the south.

We passed “The Little Mermaid” on the rock on our way in. The hallmark of Copenhagen, this sculpture in bronze was inspired by Hans Christian Andersen’s fairy tale of the same name. The sculpture was completed by Edvard Eriksen and it was donated to the City of Copenhagen by the brewer Carl Jacobsen. 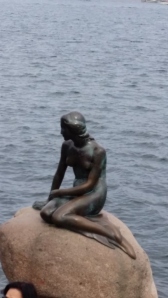 My brother Paul had been in Copenhagen two weeks before and had recommended that we go into Nyhavn Harbour as it was right in the middle of town, providing we could find a berth. We are used to calling the harbourmaster on VHF radio and requesting a berth and then being directed to a specific spot. In Scandinavia however the yachtsman finds his own berth and then reports to the harbourmaster’s office. 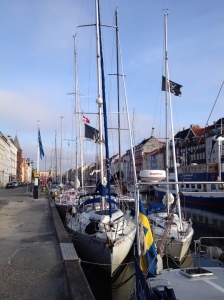 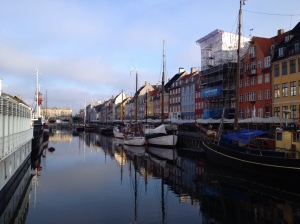 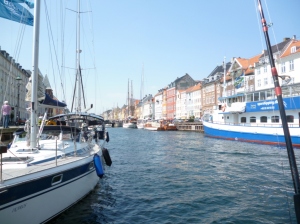 Well we found ourselves an excellent spot just inside the harbour entrance and apart from a constant stream of open sight seeing boats, it was perfect. I think the tourist boats would only bother people who went to bed early but it was of no concern to us owls. 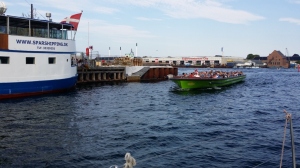 Nyhavn means ‘new harbour’ in Danish but it was very old. Apparently during the days of the square riggers the harbour was lined either side with houses dedicated to ‘ladies of the night’ but now it houses many bars and restaurants and was an extremely popular tourist area. 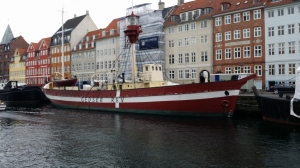 Graham found out the next morning that the system for payment of harbour fees is from an automatic machine where you punch in the overall length of the yacht and then it debits your credit card and produces a sticky label like a baggage tag which you then stick to shrouds on the mast. 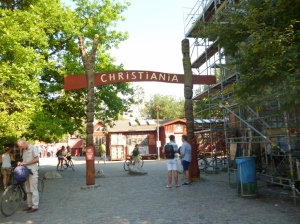 Our first foray into Copenhagen involved a visit to ‘Cristiania’. This is a central suburb that was dedicated many years ago to the dope smoking hippies of the seventies. It was a place where virtually anything went and a police-free zone. Not a bad concept in terms of keeping the drugs confined to one area rather than spread all over the city. There are two rules in Cristiania……… No Running and No Photos. There is a large entry post that states on the inside “You are now entering the EU”  and on the outside “You are now entering Cristiania”. 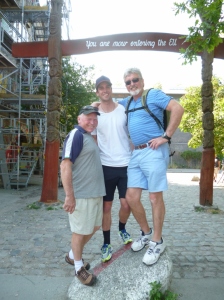 The area of land that is now “Cristiania” was originally owned by the government defence forces and at a guess would be about 4 hectares of very valuable land. There are the usual arts and crafts by day and then it comes alive at night. The word on the street was smoke what you like inside this area but step outside with drugs and you are fair game for the police. 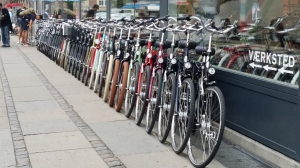 Copenhagen is a city of bikes with cycle ways everywhere. People do not usually wear helmets but then again if you don’t have to mix it with the traffic it greatly reduces the risk of an accident.  There are all kinds of bikes but the most popular seems to be the ‘sit up and pray’ style with a basket on the handlebars. 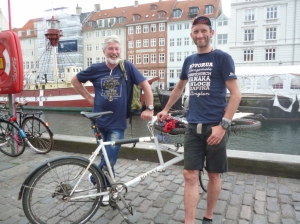 Angus Edmonds (the Kiwi we met for lunch) has lived in Copenhagen for 14 years and was the cycle mechanic for the Danish cycle racing team. He works for a cycle shop now and is a sponsored rider in the single speed mountain bike class. The week before we met Angus, he had cycled to Stockholm (600 km) with some friends from Copenhagen and it took them 3 days! 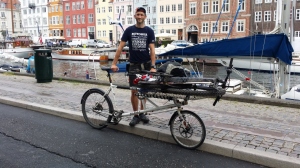 That night we found McJoys Irish Pub just a block away from where Meg was moored. There we met some interesting people. Firstly there was Jeffrey the Danish speaking Hawaiian surfer who was in computer software sales. Jeffrey showed us round the town and then on the Saturday night invited us to eat with him at the best steak restaurant in the area called “Fuego”. We watched the last of the soccer match there between the U.S. and Costa Rica. 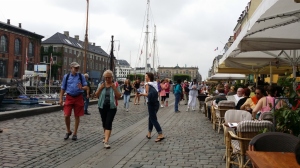 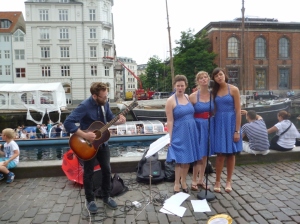 Then we met this great couple from the States, Todd Costain and Vanessa Lisboa. The two were about to celebrate their first wedding anniversary. They were very interested in the Adventures of Roaring Meg and the crew so we invited them to come sailing with us on the Sunday 6 July. We had already agreed to take Swedish Lisa who we had met in Dublin for a day sail on the Sound. 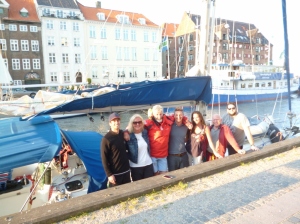 Well what a merry bunch we were on Sunday morning! Somewhat hungover but keen! Lisa had caught the early train over from Sweden and Todd, Vanessa and Vanessa’s brother Anthony had walked from their apartment just a couple of blocks away. 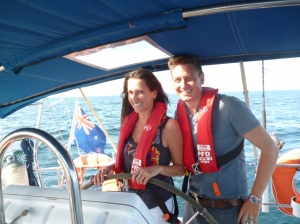 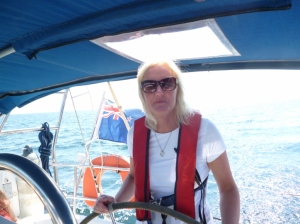 We had plenty of cold beverage but I forgot to buy bread so lunch was ‘gluten free’ but not by choice. It was a beautiful day on the Sound and we sailed within a bull’s roar of Malmo where Lisa works. It was champagne sailing and so we drank champagne! It was the perfect day for hoisting the ‘Big Frog’ a red, white and blue asymmetric spinnaker of 1080 square feet of sail. It took a while to get organised as Mike had never seen this sail before and the snaps shackles were frozen. Meg responded immediately and we were off! We sailed the full circle and arrived back at the dockside around 1930hrs feeling pleasantly tired and somewhat hungry.

Vanessa and Todd had invited us all to have dinner at their apartment that night and we were delighted. Before eating, the ‘filthy bilge rats’ were invited to shower at the apartment. What luxury as there were no facilities dockside where we had berthed. We were now clean and hungry.  What a a spread Vanessa and Lisa prepared and all served ‘en Provence’. Great food, great people and great conversation. At the end of the meal Todd produced the deer antler with one hole drilled for each shot glass which has a stem only and no base – reason – once you pick it up you can not set it down leaving one option only – drink it! 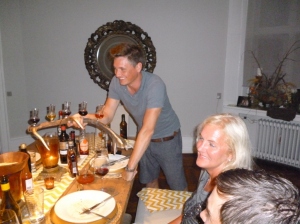 We were presented with a number of schnapps and each person chose their own poison. It was 0130 hrs by the time we bid our hosts goodbye and I have no doubt that our paths will cross again. Thank you Todd and Vanessa. 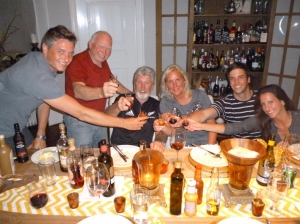 The crew were rather slow in turning to the next morning but eventually we were able to focus on going to sea again. A last crack at the internet, a few essential groceries and of course the top up of water. We had to exit the harbour and come into another Marina to find fuel and there was only 2 metres of water under the keel. It was a self service credit card deal and all went smoothly.

We followed the channel south out of Copenhagen passing hundreds of wind generators as we went. The wind was against us as we motored away. In the middle of the channel was a large lighthouse which reminded me of another little story…. A conversation took place between two maritime radio stations which went like this:

” Captain you are on a collision course. Would you please alter course by 50 degrees to starboard Sir.”

“I will have you know Sir, that this is the ‘USS Enterprise’ an aircraft carrier with over 5000 men aboard including the Admiral of the Fleet and I will not alter course. You alter course Sir!”

“I would strongly recommend that you do alter course Sir but that is entirely your call however I must inform you that I am calling from a lighthouse!!!” 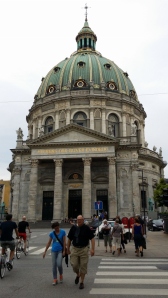 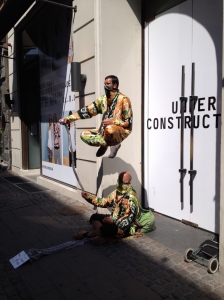 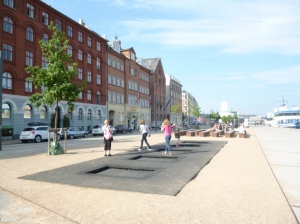 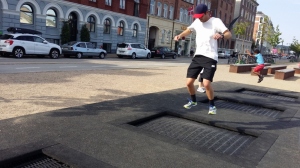 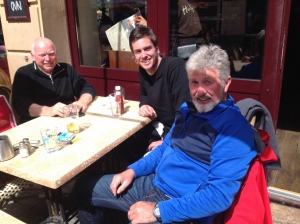