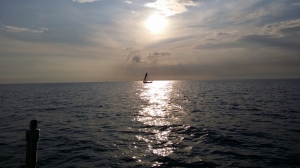 We were rather apprehensive about this particular leg of the voyage as we had heard negative comments about sailing a yacht into Russia such as;

On the advice of our agent Mr. Vladimir Ivankiv we decided to proceed as he said that he had assisted over 1,000 foreign registered yachts into St. Petersburg and had not encountered such things.

As we approached the Russian border we had three radio calls on Channel 16 (the emergency channel). The first was from the Finnish border control asking of our intentions and the second two were from the Russian border control asking the same thing. Our Russian agent Vladimir had asked us to SMS message him giving the exact time and place that we would enter Russian waters and he had recommended going between lateral marks #15 and #16. He would then contact the officials and announce our arrival.  We had arrived early and so decided to simply drift in Finnish waters close to the border and then cross at 1800hrs to time our arrival at Kronstadt, the border post, to be around 0645hrs on the 20th July.  Note: it is 90 Nm to Kronstadt from the border. Alas, everyone was watching us on radar!!

From the time we crossed the border and all the way to Kronstadt we were accompanied by a Russian submarine travelling at transit draught.  We were both making the same speed of just over 7 knots and so we said “he must have been sent out to escort us into St. Petersburg!”  Well that’s our story and we are sticking to it.

We also encountered a Viking shipin the channel to St. Petersburg not long after crossing over the Russian border between marks 15 & 16.

As we passed through the breakwater we did not recognise the border post and had trickled off in the wrong direction. Well, before we had gone a mile a patrol boat came alongside and pointed us in the right direction shouting in Russian, which was probably something like, “it’s over there you idiots!”  Poor Vladimir had been called at 0645 and asked why the Kiwis had taken the wrong turn.

We tied up at Border Patrol and produced the documentation for Meg and ourselves which included;

Customs then came aboard and inspected all the nooks and crannies on board to satisfy themselves that there were no stowaways.

Well we obviously passed the test as we were stamped into Russia and free to sail the last 16Nm into Krestovskiy Marina. There are buoyed channels all the way in and the channel has been dredged to 11 metres to allow access for commercial shipping but wander off the channel and it becomes shallow very quickly. During the long passage inside the breakwater we again saw our escort moored up in the submarine pen plus at least 20 hydrofoils passed us ferrying tourists to Peterhof the summer palace of Peter the Great. They travel at 65 kph in opposite directions in the narrow channel.

Mooring up in Krestovskiy Marina was an interesting exercise with the current of the river pushing us off the fairway and the wind blowing in another direction. Only way to deal with it is with lots of confidence and plenty of boat speed. Go too slow and the bow blows off and the result – bumper boats!

The yacht alongside of us was a Nauticat 42 (“Astraia” – a Greek God) and the owners were Charles and Diana Keiller from England. Within 10 minutes Charles had given us all of the key information.  Where to get a cold beer, directions to the Metro, the location of a large chandlery and the fuel barge. They were very helpful. The Harbourmaster spoke no English but he promptly arrived with swipe tags for the gate and toilet block compliments of Vladimir the agent.

Charles pointed out the bridge just 500 metres away where Rasputin had been thrown off with ‘concrete gumboots’ when he fell out of favour with the Romanov family, Tzars of Russia.

We had arrived at our ultimate port, the zenith of our voyage, at 60 degrees North and 30 degrees East!!!  A long way from Aotearoa.  Almost the land of the midnight sun.  Darkness fell after midnight and it was twilight again by 0300 hrs. Veni, Vidi, Vinci! 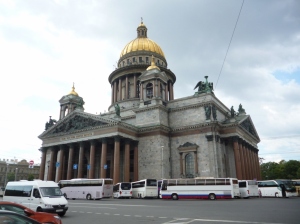 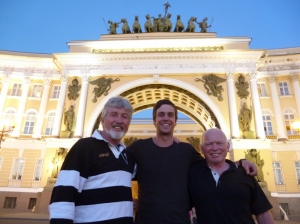 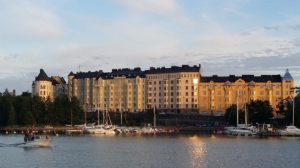 Time to explore St. Petersburg. What an incredible city of palaces, cathedrals, history, art and grand sculptures. In five days we could only scratch the surface. This is a must see so put it on your bucket list. It is easy to see why the Bolshevik revolution began here with the firing of a canon from the warship ‘Aurora’ in 1917. The Romanovs had supreme power and wealth which was ultimately their undoing, however the legacy that they left could never have been created without concentrated resources.

The highlight had to be the visit to Peterhof the summer palace of Peter the Great and later Catherine the Great. Inside the palace is something to behold but equally so are the beautiful gardens and fountains that surround the palace. 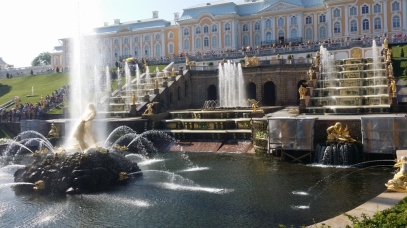 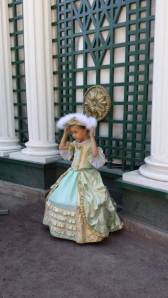 Vladimir had organised the tickets and a guide and we went with Charles and Diana and a Swedish couple Bendt and Anna who are also sailors and together we had a grand day riding the hydrofoil over and a bus back to the Metro followed by a tour of underground stations each with their own artistic decoration. 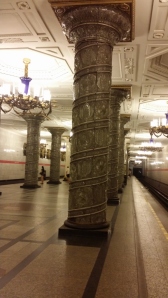 Also high on the list was attending ‘Swan Lake’ the ballet performed at the Hermitage attached to the Winter Palace in central St. Petersburg.

We ate Borsch and Stroganoff and drank Vodka and life was good.

Life was not always so good in St. Petersburg for when the Germans besieged the city of Leningrad as it was then known there were three million people living there and at the end of the siege between shelling, bombing, shooting and starvation there were only 600,000 people that survived.

The Hermitage houses some of the most important artwork in the world. There are rooms full of Renoir, Van Gogh, Monet, Garguin and Picasso. Apparently Matisse was out of town! There was not a lot of talk about the communist era – ‘nough said. We did however eat at ‘The clean plate society’ where Lenin apparently said that all children should leave a clean plate and not waste food. The food was very good. 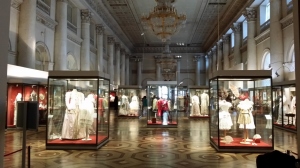 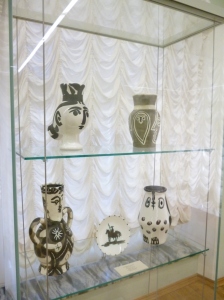 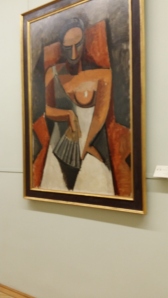 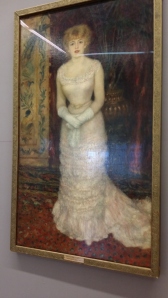 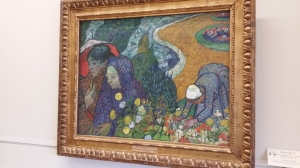 During our visit we went to the Peter and Paul Fortress which is across the river Neva from the winter palace.  Here many of the Tzars family are buried including Peter the Great who always has flowers next to his tomb. Also in closed within the garrison is the Trubetskoy prison for political prisoners.

A photo of me in the cell:

Every year at the beginning of the ‘Navigation Season’ (April until October) the Commander of the Peter and Paul Fortress would break the ice at the south entrance onto the river and collect a goblet of water which would then be given to the Tzar. The Tzar in exchange for the water would fill a goblet with silver and give it to the Commander. This would mark the beginning of the navigation season and the ice would be broken all across the river. For the rest of the year the river is iced up!

We also enjoyed a Cossack evening, arranged again by our good fellow Vladimir.  This was a display of Cossack dancing in National dress. At interval we were served sparkling wine, red wine and vodka in goblets along with a good selection of canapés. 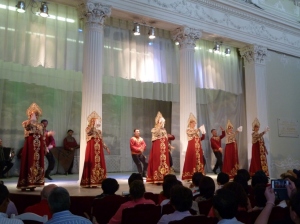 Our visas ran out on 25 July and so we made ready to go to sea. We said goodbye to our neighbours always hoping to meet them again on the high seas. I had bought a Hooter from a street vendor as we had lost our ceremonial bugle somewhere in Greece and so with loud honking from the Hooter we let go the lines and eased out of the berth. The fuel barge was across the river and we needed 80 litres of diesel which cost 2680 Roubles or as a price per litre Euros 70 cents or in NZD $1.13 per litre! Farmers eat your hearts out! Meg only holds 160 litres plus 5 x 20 litre jerry cans and they were full – bad planning! We still had 1,600 roubles to ‘get rid of’ and so I walked to the nearest corner shop and exchanged roubles for Russian beer as we had no room for a Belarus tractor.

It took us almost 3 hours to reach Kronstadt the island fortress from where the Border Patrol operate. Vladimir had called and so they were expecting us. A short time after coming alongside we were boarded by customs officials – there were two green shirts and two blue shirts and I don’t know the difference but the green shirts seemed to be more serious! They went right through the yacht pulling up the bases of the cabins and looking in every nook and cranny. When they had finished it looked like we had been burgled! They found quite a lot of alcohol, even some I had forgotten that I had. The one blue shirt who spoke reasonable English explained that we were only allowed 3 litres per person not 33 litres! Also they did not differentiate between beer and spirits in terms of litreage. I tried to explain that the beer was just cashing out of Roubles not an attempt to flaunt the law. I also mentioned that one of the crew was unable to obtain a visa at short notice in Helsinki and had travelled to St. Petersburg by ferry and would be rejoining the ship in Tallinn, Estonia! There was a big discussion in Russian.

I mentioned that we had sailed a long way and that other countries had not been so vigilant and that we did not have it aboard for commercial gain it was simply there in case we had to weather a storm. I also tried to explain that some of the alcohol may have been on board for 3 years as spirits like our spirits had a long life! Then we tried to look repentant like school boys who had been caught behind the bike sheds smoking. Our eyes were downcast! Anything to avoid a Siberian holiday.

Well we were marched inside the building and taken upstairs. Along the way my man with the green shirt with one pip on the epaulet spoke in Russian to a colleague with two pips on the epaulet and whatever was said they stamped us out and the papers were shoved unceremoniously in front of me without any farewell or “have a safe voyage” or indeed the wish that I should enjoy a long and happy life!

We were delighted to be ‘On the road again’, and we cast off without making the ship ‘ship shape and Bristol fashion!’ St. Petersburg had been a fabulous port of call and I would thoroughly recommend it to anyone particularly someone with 3 litres of grog or less.

Vladimir Ivankiv is a top man and operates through the St. Petersburg Central Yacht Club or Rosita Travel. Basically he can organise anything and his fees are very reasonable.

The weather had been superb with temperatures of around 30 degrees Celsius – shorts and T shirts.