A journalist in Kalmar, interested in why a few kiwis had made it with a New Zealand regiestered yacht all the way to Sweden, wrote an article in the local paper about Meg.  Below is the translation to English.  You can view the actual article by clicking here. 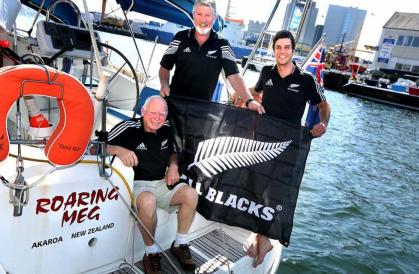 Photo Caption: The crew of Roaring Meg: Graham Reiher, Noel McGuigan and Mike Watson are all fans of the New Zealand national rugby team ”All Blacks”

The wind brought them here.  Barometern-OT stepped over the gunwale to 40-feet Roaring Meg and her New Zealand crew.

A New Zealand flag appeared on Thursday in harbor.  It appears so many people and ask questions, so we should write the story on the boat says crewman Graham Reiher who commonly lives in Auckland, New Zealand.

Roaring Meg , as the boat is called, has not sailed all the way from Auckland to Kalmar, but far enough. The sailing started approx. 100 days ago. Start port for the journey was Tangier, in Morocco on the other side of The Strait of Gibraltar. I think we have visited 13 different countries says Graham Reiher and it looks like he is counting.  The crew has been changing during the journey, but the core group is New Zealander.  We have also invited locals, people we met and liked, to join us, tells Graham Reiher.

The Swedes are tall, big and curious, he think´s. A large bag of candy has also been bought on Swedish soil and is standing down in the cabin atop the chart.  Kalmar is Roaring Megs second Swedish habour to enter after Gothenburg, but actually it should have been Visby.  The wind brought us here says Graham Reiher.  Next it´s off to Stockholm and then towards Finland and the Baltic States.

One thought on “Roaring Meg in the News”